On the Trail of the Kirtland’s Warbler

During Spring Migration in Point Pelee National Park, one of the most sought after birds is the Kirtland’s Warbler.  They are only migrating through, usually to Michigan, where the majority of them breed in the Jack Pines of Grayling.  There were several reports of them during our time in Pelee, some of which turned out to be overeager misidentifications of similar looking warblers.  There were a few good sightings, but I kept on missing them, and eventually stopped chasing.  I figured I had lost my chance at seeing one this year.

Or had I?  An announcement on June 13, from the Ontario Field Ornithologists, OFO, about the opening of a tract of land in Simcoe County that had been under development since 2019 to remove invasive species, plant native ground cover, do controlled burns and plant more Red Pine.  The goal, attract the once endangered, and still threatened, Kirtland’s Warbler, with the hope they will increase their breeding range beyond the Jack Pines of Michigan and use the very similar Red Pines of the Packard Track in Simcoe County. 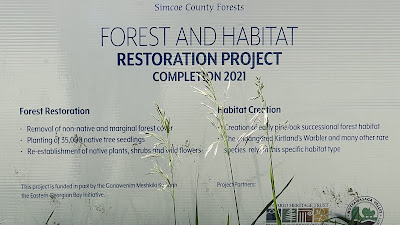 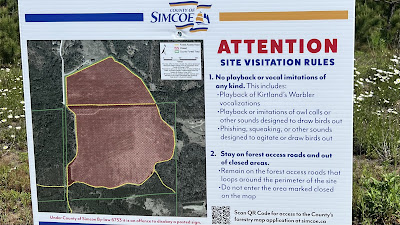 You can read all about the conservation project here:

The OFO has, this year, introduced an ambassador program to enlist the help of local birders in helping coordinate viewing of rare birds in particular locations so all birders can safely view species that might otherwise be difficult or impossible to see.  For the Kirtland’s Warbler, it is on a public piece of land called the Packard Tract.  Due to the sensitive habitat the birds are using, it does require monitoring so all that come obey certain rules and stay on the path.

I headed out early the next morning for the 2-1/2 hour drive from Brantford to Simcoe County.  I arrived to find a representative from the OFO giving new arrivals directions to the best viewing spot.  He was also collecting donations for the Kirtland’s Warbler conservation efforts, which I was happy to contribute to.  I walked along the path and it wasn’t long before I was hearing the distinctive song of the male Kirtland’s Warbler.  Seeing it was another matter.  But with the help of other birders, including my friend, MC,(who I seem to run into at almost every rare bird sighting in Ontario), and the forestry people, who were there to monitor the site, we soon spotted one, then another, deep into the pines. 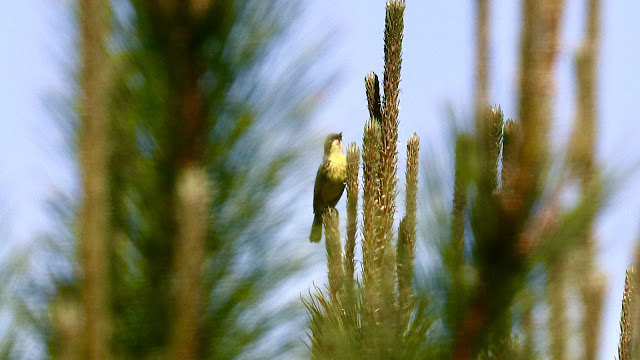 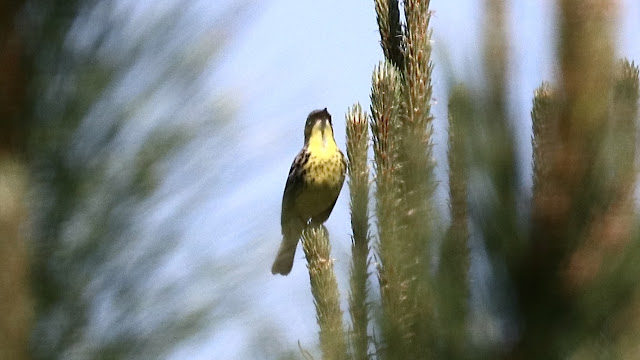 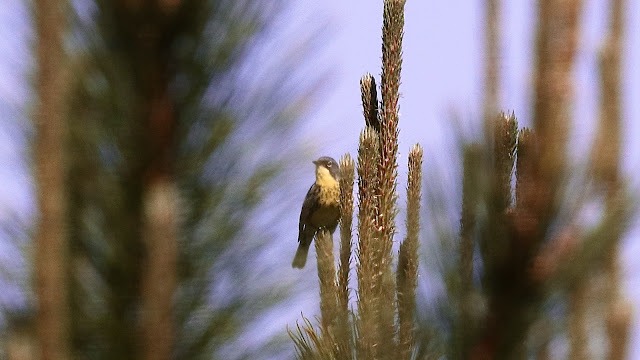 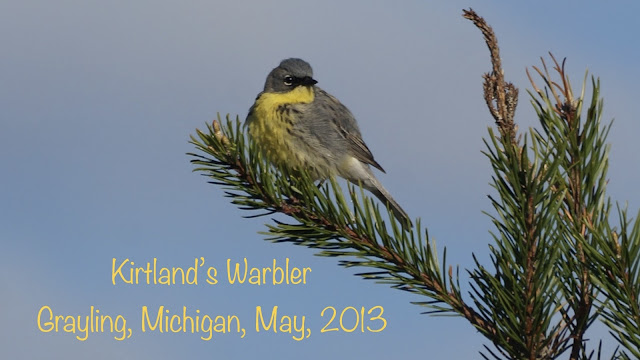 Photo opportunities were good, not great, but it was exciting to finally see a bird I had longed to see in Ontario.  It was a Lifer for many and for me a Canada and Ontario Lifer.  It was also species 377 for the year.  Oh, and as a bonus, there was a Lark Sparrow hanging out along the fence where all the cars were parked. 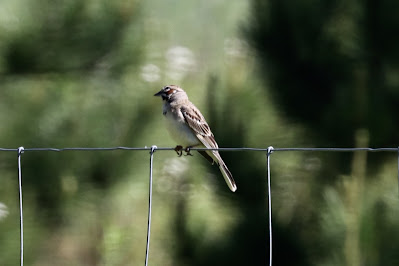 Now, as I type, I am awaiting a flight to Halifax, Nova Scotia.  My new friends from Edmonton are there and they messaged me yesterday that they were going to see a Wood Stork.  What?  Yes, a rare for Canada Wood Stork was being seen near Guysborough.  I quickly booked a flight on Porter Airlines and searched for a hotel.  That was harder as there was nothing in the area.  I did find a room at the Hearthstone Inn, about an hour away in Port Hawkesbury, so I had a place to stay.  Now, for the rental car.  After my misadventures in Edmonton I was worried.  But Enterprise had lots of cars available to rent in Halifax, so I was all set. Now, all I need is yet another rare bird I am chasing to stick around for a few more hours.