Heck, we’ve had a Stellar’s Sea Eagle out that way, so why not a wayward Wood Stork?  Obviously, overshot the migratory route up to Georgia and South Carolina.  But we’re glad to have this youngster in Canada.  Another Canadian Lifer for me, thanks to the friends I made in Edmonton last week, Sean and Marnie Evans.  They had told me they were going to Nova Scotia but I never expected news of a Wood Stork.  I really hadn’t thought I could get there and back, since I was leaving Monday for Yellowknife, in the Northwest Territories.  But, to be honest, I have done crazier things.

So, on Thursday evening I booked a Porter Airlines flight to Halifax.  Reserved a hotel room and even had no trouble getting a rental car.  I drove to Toronto on Friday afternoon and had a direct flight to Halifax, but more than a three hour drive down to New Harbour, from where the bird had been reported.  It was overcast and raining and though I got there just after sunset, it was too dark to see anything, plus the moment I got out of the car, the rain started coming down in sheets and I jumped back in and headed for my hotel.

Trouble was, it was pitch black, raining, I had over an hour drive ahead of me and it was past 10pm. I should have just gone straight to the hotel and skipped the moonlight birding.  But, to be honest, I have done crazier things.  I also had to go slow and watch for moose.  In the rain.  In the dark.  What was I thinking?

However, I made it to Guysborough intact and picked up my room key and went straight to bed, without dinner.  My punishment for not planning ahead.  I set the alarm for 5am and was on the road soon after, stopping only to pick up breakfast at Tim Hortons, which thankfully was open for early birders.  My other issue, aside from hunger, was I needed to get there, get the bird and head back to Halifax for my 1:45 flight to Toronto.  It was the only flight out that afternoon, though I was willing to miss it and take a later Air Canada flight if necessary.  It was just over an hour to where the bird was hanging out, but over 3 hours back to Halifax.

I picked one of the GPS coordinates from eBird and pulled up to the side of the road, where I could view a small grassy island, through the fog.  To my utter surprise, the Wood Stork was sitting right there, preening.  Just as I slowly got out of the car, with my camera, the stork flew off into the fog, necessitating a chase for a photo op.

It was a foggy day… 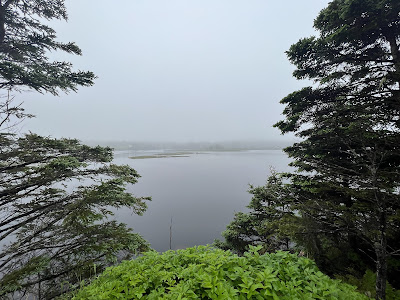 I drove around the estuary a few times, stopped and got out of the car again to search.  To my continued astonishment, there was a tern, bigger than an arctic tern, and with a long, mostly black beak.  I checked my iphone field guide, iBird Pro, and looked on eBird as to what this tern would likely be.  Turned out, the tern was a Roseate Tern.  Another Canada Lifer,(440)!

I continued my drive back and forth around the estuary, and found a pullout.  About 100 yards away, in the fog, the Wood Stork was foregoing in the grass.  I could barely pick it out with my binoculars and hardly photograph it at that distance in the fog, and figured that was going to be the best I could get, once it flew off.  As usual, I figured wrong.  I drove back to the causeway bridge, hoping to maybe get a photo of the Roseate Tern, but it had flown off.  Much to my continued amusement, the Wood Stork flew in and landed less than 50 feet from me, and started fishing.  I was literally jumping for joy and there was no one there to celebrate with.  I kind of felt like the time in Arizona black in 2012 when I found a Nutting’s Flycatcher and had no one to High Five that day, either.

My first photo, from a few hundred metres away,

shot with my 400mm zoom and heavily cropped: 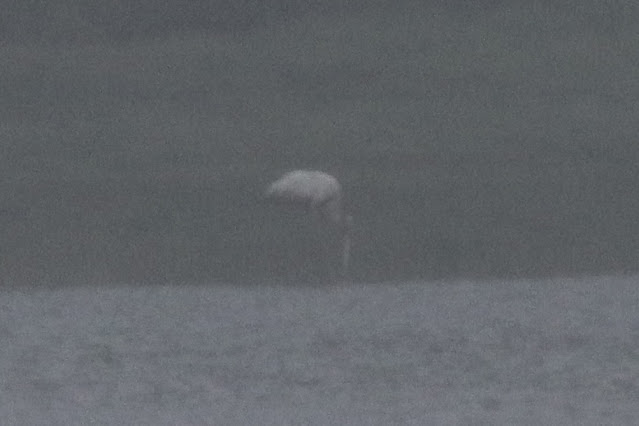 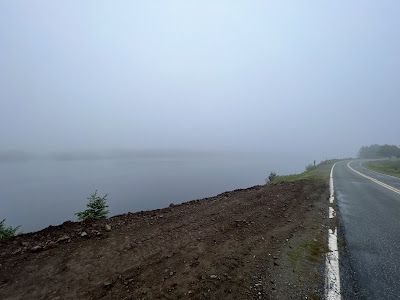 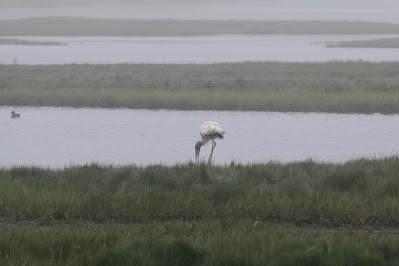 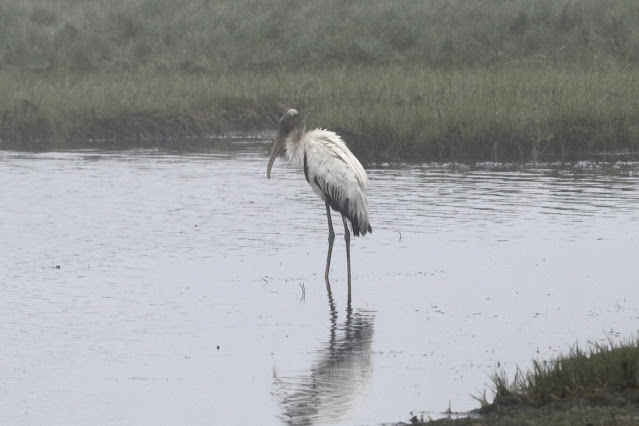 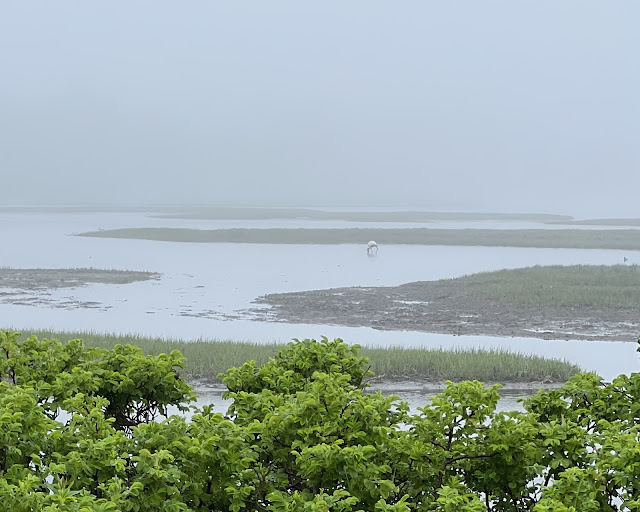 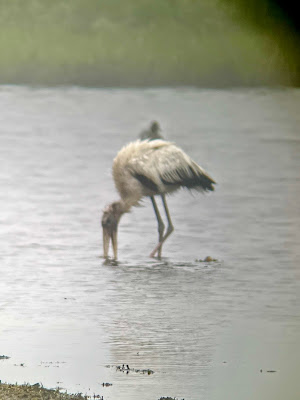 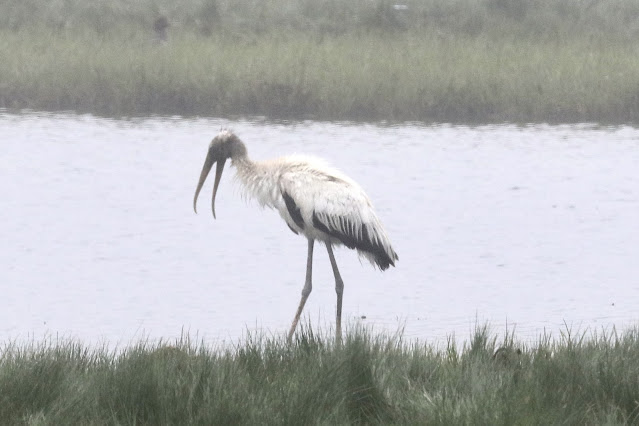 I got my photos, mapped my trip back to Halifax, thinking I had another hour too bird, and realized I had miscalculated the time needed to get back.  I should be heading to the airport at 8:30, not 9:30.  Now I had to boot it back to Halifax, over three hours away, so as not to miss my flight. Once again, what was I thinking?  Luckily it was only a few minutes past 8:30 and I did get back to Halifax and the airport in the nick of time and made my flight back to Toronto.  For a day, anyway.  That was Saturday. I spent Sunday at home, but am now on my flight to Yellowknife in the Northwest Territories, as i try to fill in my Canada territories and provinces Bingo Card.