And a good thing I did.  Before I was to leave Whitehorse for my flight to Toronto, I heard there was a Garganey, a rare species of duck, outside of Edmonton.  It was easy enough to adjust my flights to get there within 24 hours, but that was still not fast enough.  The Garganey was gone by the time I arrived.  And what an adventure it was, just getting there.

First I had to rebook flights through Air Canada, which was easy enough for a small change fee.  Next, book a hotel room near the airport.  Check.  And finally, book a rental car through Enterprise. Nothing available at the airport, but off-site locations seemed to have cars..  It looked like I had a reservation; it was confirmed and I even completed  the on-line check-in.  The next day, I received a call that the location was out of cars.  I tried again.  Again I got a reservation, conformation and online check-in.  While at the airport in Vancouver awaiting my flight to Edmonton, I get an email saying that the new location had no cars. 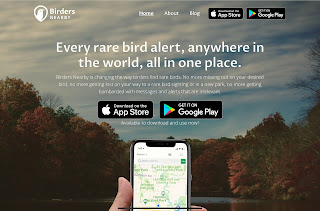 Now, I was in trouble.  I was arriving for a three day trip to Alberta with no way to get around.  I began contacting Edmonton and Alberta birding groups on Facebook,(yes Facebook has some good points, along with all the crap, too).  I was fortunate enough to hear from Marnie and Sean Evans, who were happy to pick me up at my hotel that evening and take me to the Garganey spot.  Meanwhile, I arrived in Edmonton and went to the all the other rental car places, to find that there was a huge shortage of vehicles do to some kind of pandemic thing that had been going around.  I returned Enterprise counter, and begged for a car, but no dice.  Then, in a moment of inspiration, I decided to check on-line to see if there was a car available the next day.  Sure enough, Enterprise had one compact vehicle coming in the next morning.  I scooped it up and could drive myself the next two days.

Back with Marnie and Sean, we ventured out to the wetlands where the Garganey had been seen. On the way, just around the corner from my hotel, Sean stopped the car.  A California Gull, which I couldn’t find in British Columbia, was just hanging out at the side of the road.  I jumped out of the car and snapped a quick photo. 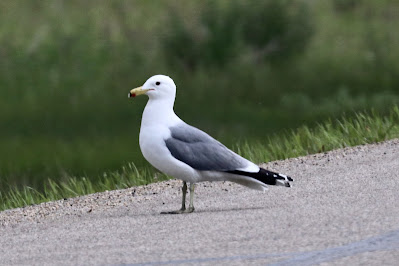 Alas, when we arrived at the wetlands, the Garganey had left for parts unknown, but the fields were filthy with American Avocets, Black-necked Stilts and Wilson’s Phalarope.  We had a nice time birding there, and I thanked Sean and Marnie for their efforts and they drove me back to my hotel.  On the way back Sean shared some locations with me that would help me add several more species to my year list over the next day and a half. 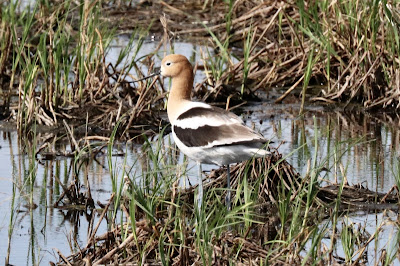 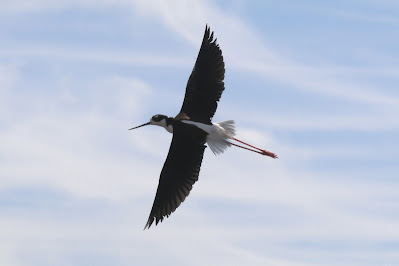 Not unlike Sheldon Cooper, the Black-necked Stilt did not want the American Avocets in its’ spot: 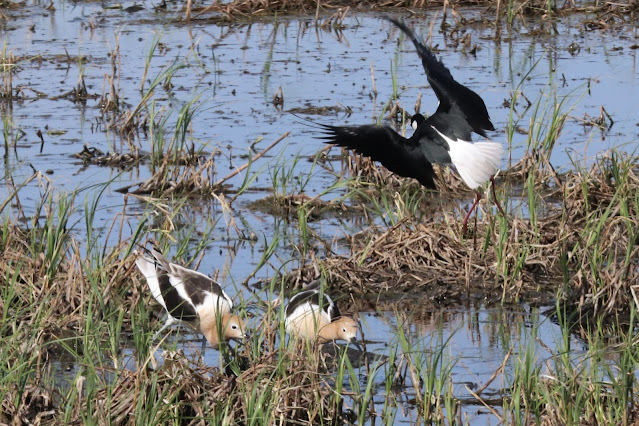 I went back early the next morning looking for the long-gone Garganey, and instead found a Marbled Godwit and Long-billed Dowitcher,(370).  After an hour or so of searching with a couple of other birders, I headed to the grasslands where Sean had told me about Sedge Wrens and Yellow Rails.  Often better for hearing in the evening, he did tell me that the rails do call during the day and there were sparrows and even a Sprague’s Pipit possible too.  When I arrived at Range Rd 183 I was already hearing Sedge Wrens,(371), as I walked the stretch of road where the Yellow Rails nest.  It took a while, but eventually I was hearing the distinctive tic-tic-tic of this elusive bird,(372).  If you ever pecked slowly on an old school Underwood typewriter, it kind of sounds like that.  No photo, as it often takes a rice harvester to flush them, as I saw at the Yellow Rails and Rice Festival in Louisiana.

Yellow-railed fleeing from a rice harvester circa 2012: 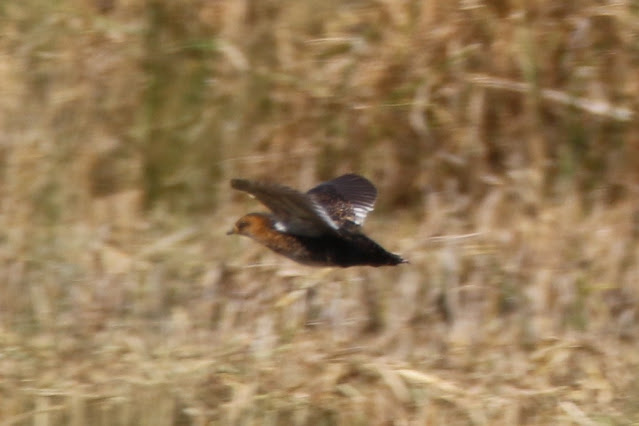 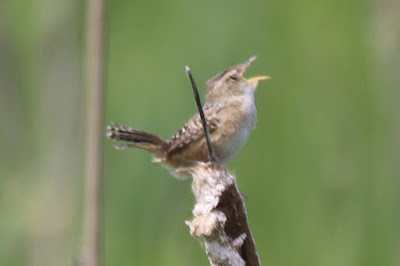 No more new birds that day, but the next morning, which was my last in Alberta this time around, I headed to Hastings Lake and was greeted by at least 50 American White Pelicans,(373), and a kindly old gentleman walking his dog.  We had a nice conversation and I got to watch the pelicans take off and soar overhead before heading out to look for sparrows and pipits along another grassy farm road. 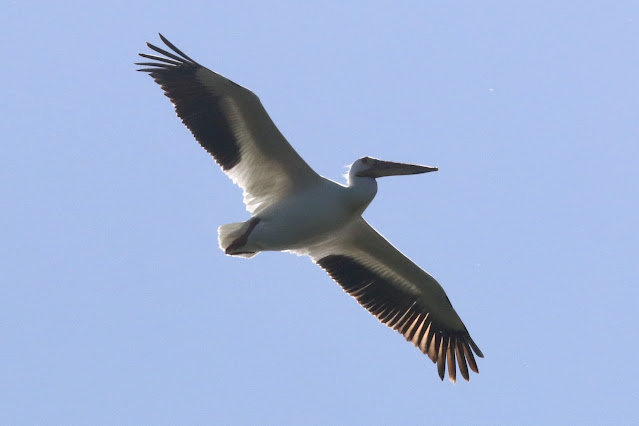 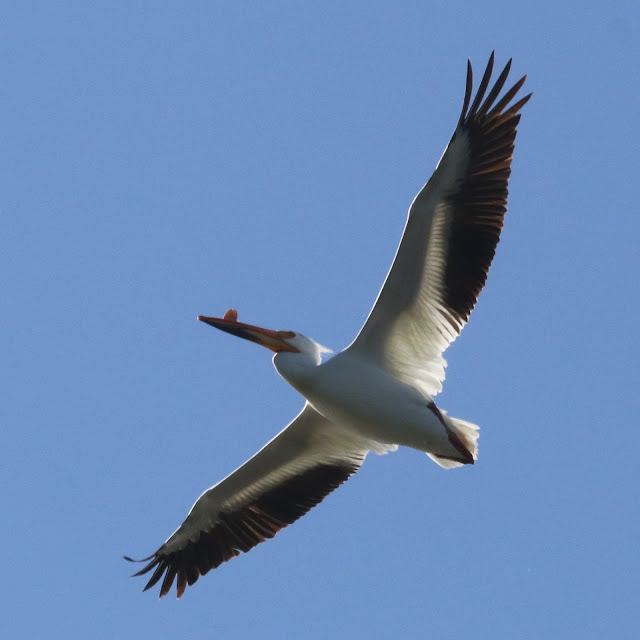 I had a few more targets left before heading to the airport for a flight home: Sprague’s Pipit, LeConte’s Sparrow and Nelson’s Sparrow.  I drove to the recommended HotSpot on Township Rd 490 and stood at the side of the road listening for the distinctive calls of all three birds.  The LeConte’s Sparrows were calling from both sides of the road and making brief appearances on the tops of the grass.  The Sprague’s Pipit took a little longer to identify.  At one point, I just closed my eyes and listened for about 5 minutes until, finally heard it calling from out in the fields.  The Nelson’s was a no-show, but I still had two more species for the trip. 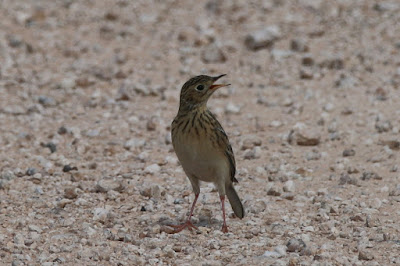 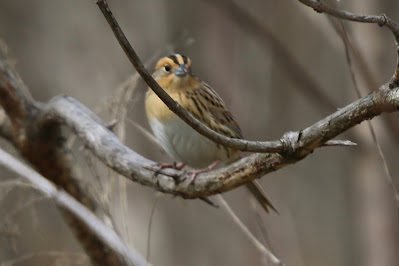 At that point I was getting close to having to rush to the airport, get gas, and return my cherished rental car.  But I was forced to make one more stop.  A dangerous one at that.  As I was driving up yet another farm road, somewhere south of Edmonton, I spotted two big black birds chasing some kind of falcon or raptor.  I pulled to the side of the road and got my binoculars on a Prairie Falcon being harassed by a pair of Common Raven.  I had not expected to see one until I got to Saskatchewan in July.  As I tried to get out of the car to attempt a photo, huge tractor trailers were zipping by, very close, not even trying to pass me safely.  Suffice it to say, I didn’t overstay my welcome.  But the Prairie Falcon was #376 for the year and the 8th new species in less than 48 hours in Alberta, on a trip I hadn’t even planned when I left for the Yukon.  And, once again, thanks so much to Marnie and Sean, who helped me out in my hour of need and pointed me in the right direction for all these extra birds. 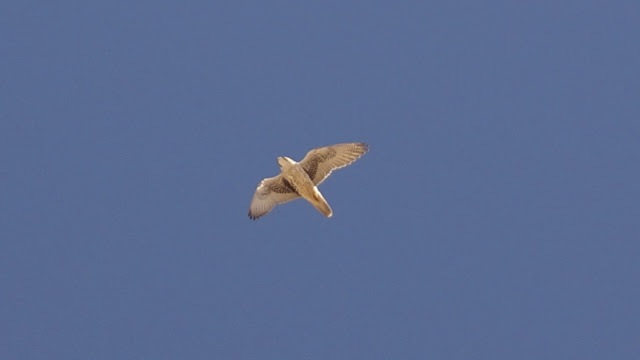