Okay, I admit it, the main reason for my trip all the way up to Dawson City, besides looking for ptarmigan, longspurs and gyrfalcon, was to bird the sites that stood in for Attu Island in the movie The Big Year.  I had been to Tofino, where many scenes in the movie had been filmed for the pelagics and seaside settings, and it is likely I may never get to Attu, so driving the Dempster Highway for birds and the scenery and locations of The Big Year was motivation enough to make the trip. Of course, doing a Big Year and visiting the territories and provinces of Canada was an important motivation too, I suppose.

I arrived in Dawson City after a 6 hour drive from Whitehorse, to discover a dusty, quaint frontier town that had all the trappings of the old west, the gold rush era, gambling establishments, saloons, and dancing girls, if you knew where to look.  I was there for the birds, so spent more time on the dusty gravel roads leading up to the Arctic Circle and beyond to the Arctic Ocean.  Alas, I did not have the time to make the long drive, but I did make it as far as kilometer 158, where I found a Lifer Gyrfalcon in a nest built high on a sheer rock wall.

But I am getting ahead of myself.  I arrived in Dawson City late in the afternoon, but too early for dinner or darkness.  Well, it’s almost always too early for darkness at that latitude.  It doesn’t get anywhere close to real night and only in the wee hours.  So I had time to scout out the first bit of the Dempster Highway and I made it as far as the sign for Tombstone Territorial Park. The road is all gravel and dust, all the time and the back of the car takes a beating.  I can see why they sell windshield crack insurance.  I was lucky to have been given a nice Ford Edge with a pre-cracked windshield, saving me the insurance or expensive repair bill.

The Westmark Hotel, where I stayed in Dawson City: 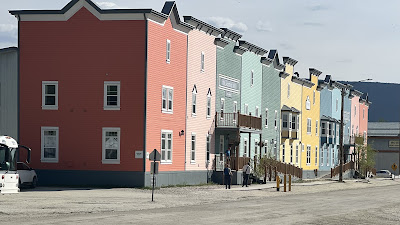 A small section of The Dempster Highway: 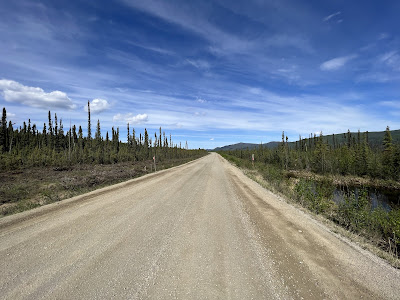 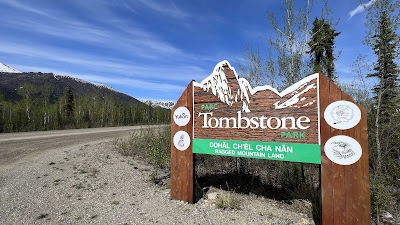 That evening, after checking into my hotel, I had dinner in the dining room of the Westmark Hotel, a lovely bison and pasta dish, and got to sleep early. The next day morning I retraced my drive to  Tombstone, and before I even got to the sign, I saw the first of many Willow Ptarmigan, flush up from the side of the road.  Not the best sighting, so I was glad to know I would see more. 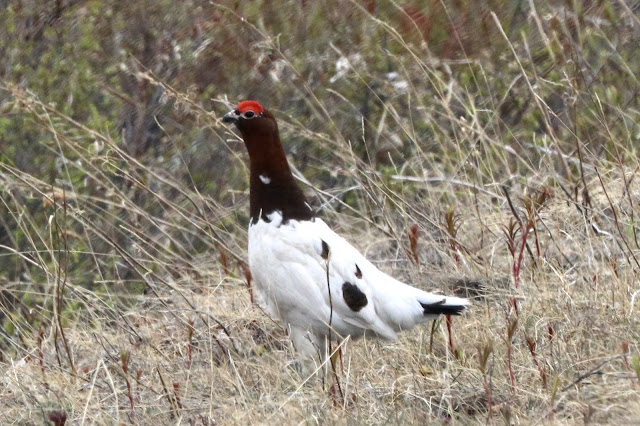 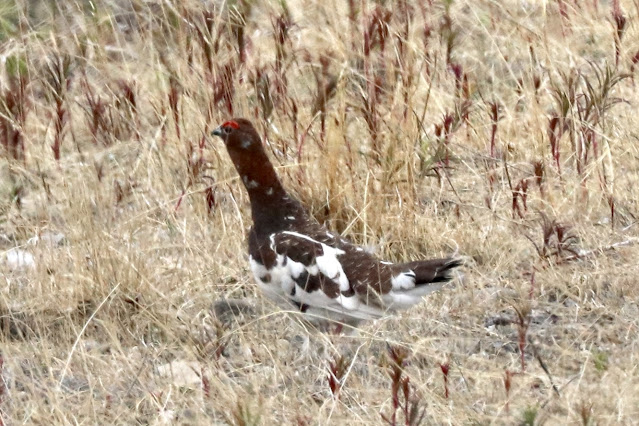 Soon after, I arrived at the main park building and met Miriam, one of the park rangers, who was about to join a morning bird walk.  I had walked, serendipitously, into their annual birding event, and joined their morning walk.  Along the way, she introduced me to Sebastian, who was leading another walk, later that morning, up to Surf Bird Mountain, which I also joined. Mostly. 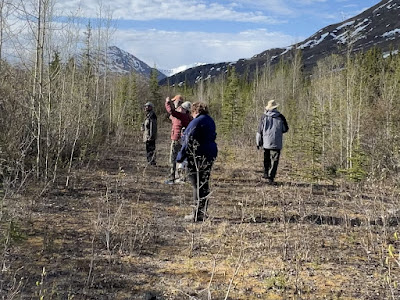 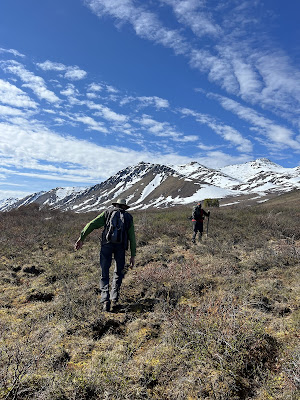 Walking on the “frozen tundra” is not as easy as it seems.  The ground cover is very spongy and sits about a foot above the permafrost.  With every step I would sink in and because of my leg disability I was exhausted about two-thirds the way up.  I also have stents in my heart and was getting close to the point where I thought my health was at risk, so I let everyone else journey up to the ridge and made my way down.  On the advice of another birder on the hike, I made my way to where he said Smith’s Longspurs were likely nesting and when I finally arrived, I was actually hearing them sing.  It took a few minutes, but a pair popped out of the bushes and flew directly past my binocular view.  I may not have made it to the top to see the Rock Ptarmigans, but I got Smith’s Longspurs and that was reward enough for my tired body. 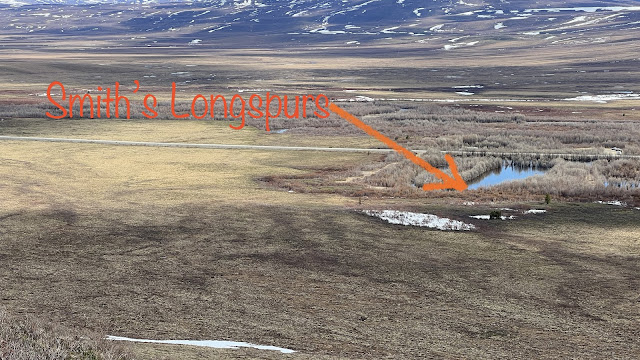 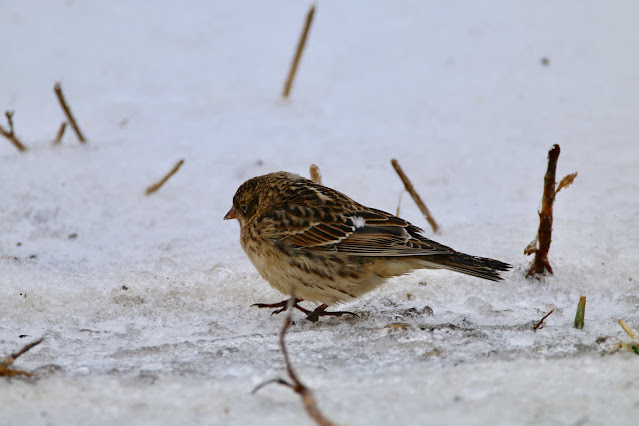 Then came my big break.  I had been given a pamphlet of all the sights to see along the Dempster Highway, at the Visitor Centre.  I read that if you drive to Kilometer 158 and look up at the sheer cliff face, you may see a Gyrfalcon nest and may be lucky enough to see the Gyrfalcon.  That would be a Lifer and I was excited to get driving the 80 or so kilometers to the location.  Armed with snacks and still hot coffee in my Thermos,(purchased almost 20 hours earlier at a Whitehorse Tim Horton), and not much else, as I had forgotten to pack a lunch, I headed up late that afternoon.  It didn’t take me long, after finding the KM 158 sign and the rock wall, to discover the nest.  And sitting in it, a Gyrfalcon.  It was species 367 for the year, and 699 for my ABA List.  I was one away from joining the 700 Club! 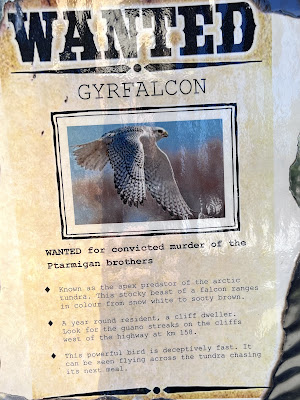 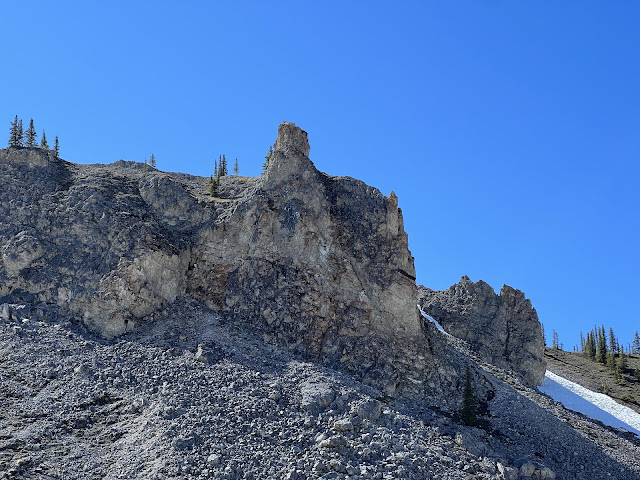 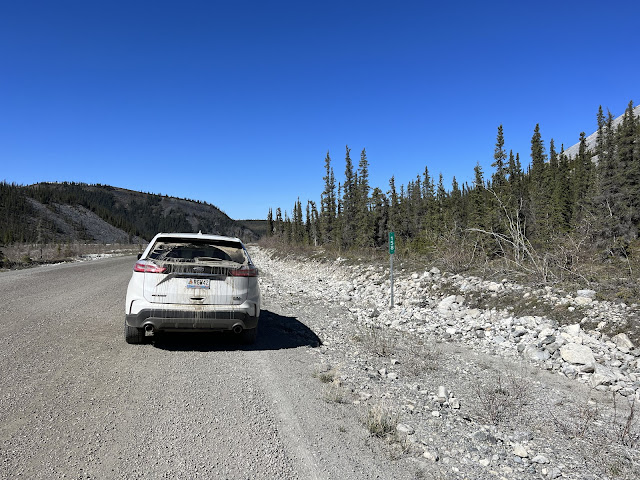 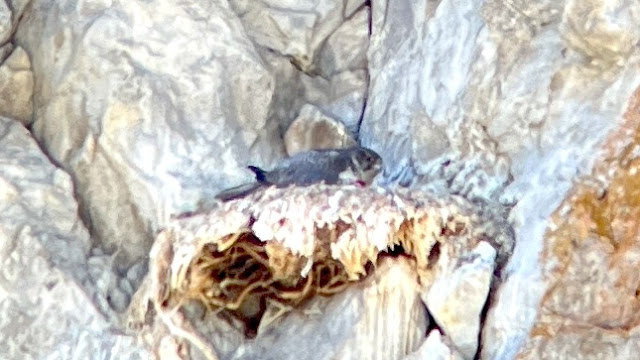 It was getting late in the day, though far from dark, and I hadn’t eaten much else than trail mix all day, so I drove straight back to Dawson and enjoyed a steak dinner at one of the local dining establishments and got myself to bed early, so as to get back on the Dempster Highway in my quest for ABA 700, a Rock Ptarmigan.  I was also further north than I expect I will ever be, just about 300 km from the Arctic Circle.  Had I a few extra days, I could have made all the way to the Arctic Ocean.

The next morning, if it can be called that, since it never seems to become night, it was cool and raining, turning the ever present dust to mud.  I had the hotel’s buffet breakfast and was driving north by 7am.  It wasn’t long before I was seeing Willow Ptarmigans everywhere.  They were mostly at the sides of the roads, either singles or in pairs and were even “posing” for photographs, thank you very much.  But it was the Rock Ptarmigans that I was really seeking.

I knew they were more likely at the higher altitudes, and I also knew I was unlikely able to climb to said higher altitudes, so I stopped frequently along the highway and scoped the tops of the mountains for white blobs,  Most were unmelted snow, but somewhere about 1000 feet up the side of one slope, there was a moving white blob on a huge bolder.  It took a bit of focus and patients, but finally it resolved into a Rock Ptarmigan.  I finally had number 700.  Due to the distance up the mountain, I just couldn’t get good photos or videos, but below is the best I could get, and had to be happy with the results. 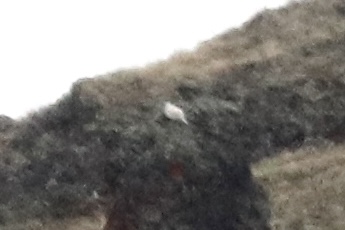 I began this birding journey in 2012, doing a North American Big Year, with almost no experience as a birder, having only bought my first cheap binoculars a week before, at a Boxing Day sale.  I spent the year traveling for my job, with the Toronto Blue Jays, and saw 600 species.  596 of them were on the ABA List at the time. It took 9 years, 5 months and 5 days to add an additional 104.  And it brought me to the Dawson Highway, a place I’ve wanted to visit for over 10 years, since it was here that the movie, The Big Year, my inspiration for becoming a birder, filmed the scenes that took place on Attu Island.  It was the scenes and scenery depicted on Attu, but actually Canada’s own Yukon Territory, that made me become a birder.  I had finally made it to two of my most desired goals, 700 species and the feeling of being close to the Birders of The Big Year.

As far north as I ever expect to be: 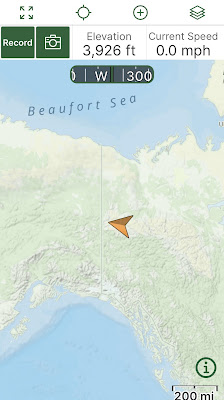 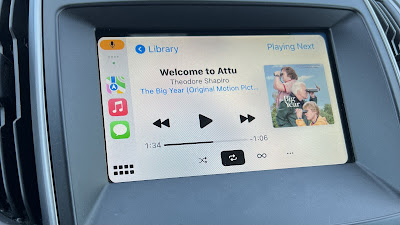 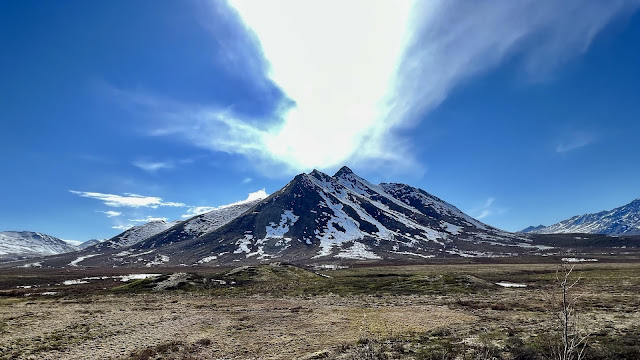 I had wanted to stay here, in one of the rooms the main cast of The Big Year stayed in, but it was sold out when I tried to make my reservations: 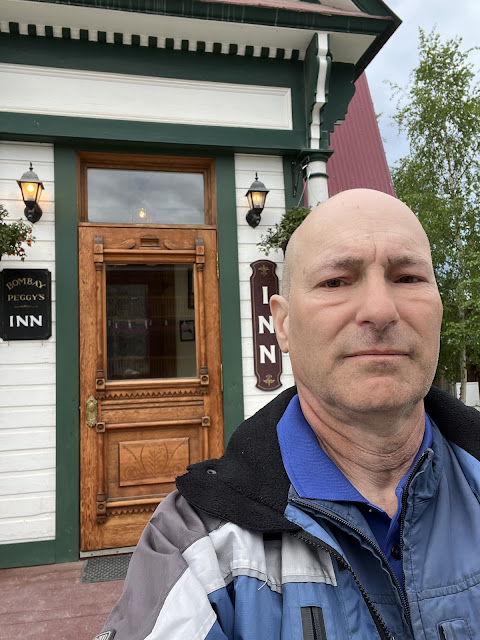