That West Coast Birding Vibe and an Amazing Rarity in Ontario

Breaking News: I arrived home from British Columbia to the knowledge that the super rare Marsh Sandpiper was still being seen at the Thedford Sewage Lagoons.  I drove directly there, stopping in Brantford on the way to pick up Sue, and on a dreary and wet afternoon, met up with a bunch of birders and was able to view this incredible bird.  Lifer number 698 for the ABA Area and species 288 for The Big year.

Now, back to the west coast…

I couldn’t have asked for a better start for my trip to British Columbia than to see a Sooty Grouse in full breeding display.  My BC birding buddy Rich, who is doing a Metro Vancouver Big Year, suggested I visit  Burnaby Mountain where a fellow birder had just been hearing a Sooty Grouse.  I abandoned my search for song birds down at Burnaby Lake, and drove right over.  It was a short drive and an even shorter search.  As I walked up the hill above the parking lot, past the playground and dog walkers, I was already hearing the grouse calling.  Then, to my amazement, the grouse was walking right toward me.  I had to back off a bit so as not to scare it.  It was so close I even got videos with my iPhone. 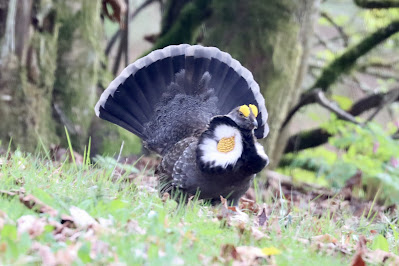 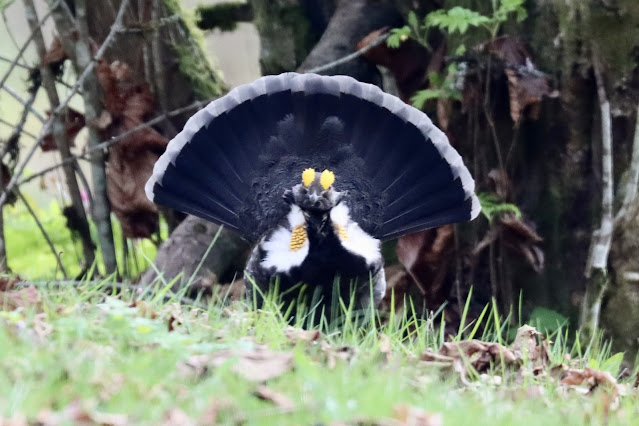 It was species 263 for year and my fifth new bird of the day, which included west coast specialties Black-throated Gray Warbler and Bewick’s Wren. Still, it was just the start of a magical couple of days on the mainland.  That evening I drove up to Squamish to spend the night and the next morning drove up to Whistler and birded Fitzsimmons Fan Park which borders on a Jack Nicklaus designed golf course, where I got Western Meadowlark, Pacific Wren and even an American Pipit.

The next day I drove up Lillooet, which I am still unable to pronounce, about two hours northeast of Whistler, mainly looking to see a Chukar or Dusky Grouse. I got much more than I bargained for, even though I did not see the intended targets.  I came upon a house with a For Sale sign and a woman in a car stopped to ask me if I was birding.  I told her about my quest for a Chukar and she said I was in the right place, if not at the right time.  Her yard is one of the places they hang out and she gave me permission to walk down the driveway and search.

And what a yard it was.  Teaming with birds and feeders of every variety.  I had added Cassin’s Finch amongst the many Pine Siskins at the feeders when the homeowner, Ian Routley, arrived with his friend Chris and guided me around his property. He was a little taken aback at first when he saw a stranger on his driveway, but I explained that I had told his wife about my Big Year and she had given permission to enter.  He found a flock of Gray-crowned Rosy Finch on his deck railing, but they had flown off before we could see them up close.  They did come back to his trees shortly thereafter and then the hummingbirds started coming to the feeders, including a Calliope Hummingbird.

We then walked up the driveway listening for Pygmy Nuthatches.  Ian and Chris were hearing them, but I wasn’t picking up the call, so wasn’t going to be able to count them unless they showed.  And boy, did they, a flock of about 45.  I think in previous years seeing them in places like Arizona, seeing one or two was a big deal.  They once’s, like the rosy finches, filled the top of a tree.  I also go really nice looks at a male Mountain Bluebird as a bonus. 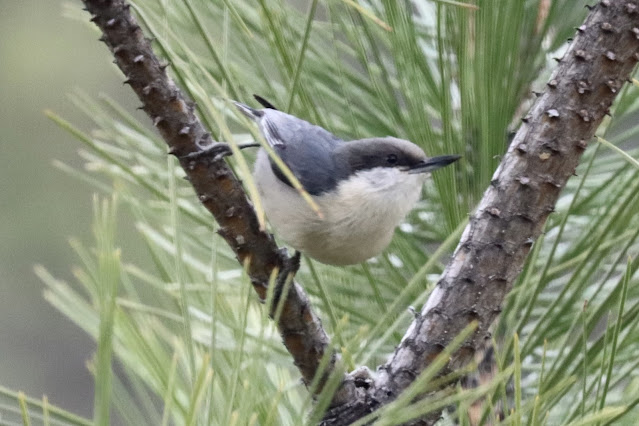 After a long drive, ferry ride and another long, late night drive along a twisty, dark road I made it to Tofino and was ready for my pelagic.  I was not really prepared for the tiny finishing boat this trip took out to ocean.  Yes, I had my seasickness patch on and yes I took an anti-sea sickness pill, but after about 4 hours it was too much for many of us and we chummed the sea, so to speak.  No lifers on the trip but the birds were amazing.  Cassin’s Auklet, Marbled Murrelet, Black-footed Albatross, Fork-tailed, Pink-footed and Sooty Shearwater, and even a Western Gull. 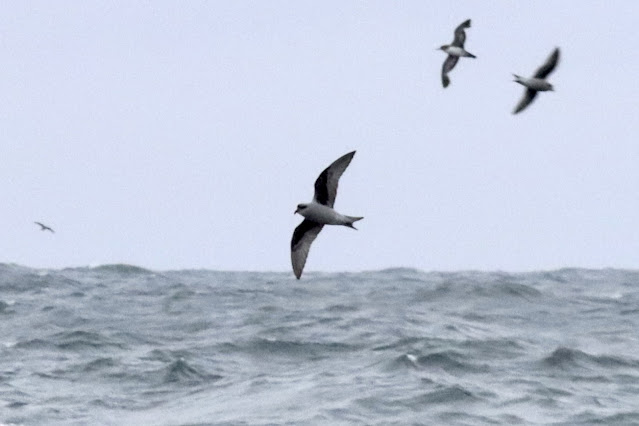 Once on dry land I was grateful I had a complete change of clothes in the car, as I was soaked from top to bottom, even though they had put us in these heavy, orange suits.  Turned it they were only for protection against drowning, not to keep us dry.  They trip back was described as the worst conditions they had ever had on a pelagic.  Oh, lucky me.

Once, changed and dried out, I drove over to Chesterman Beach Pacific Rim National Park where I got Western Sandpipers, Semipalmated Plovers and the bonus bird of the trip I wasn’t expecting, a Snowy Plover, another Canadian Life Bird.  I headed back to the ferry and a well deserved sleep, before my final day in Vancouver.

I spent my final day in Vancouver fretting over the Marsh Sandpiper sticking around in Ontario, but had a fun time birding with Rich, who helped me find Hutton’s Vireo, Hammond’s Flycatcher, a Least Sandpiper and my two favorites of the day, a Cinnamon Teal and a very friendly and striking Yellow-headed Blackbird.  They Red-winged Blackbirds were even more friendly, landing on my hands and even side view mirror as I was leaving, as if they didn’t want me to leave.  I had to apologize and get going, but did get a Short-billed Dowitcher and a Whimbrel before leaving British Columbia. 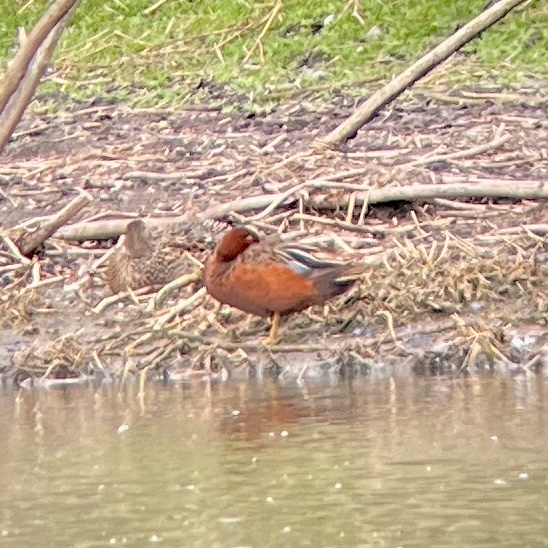 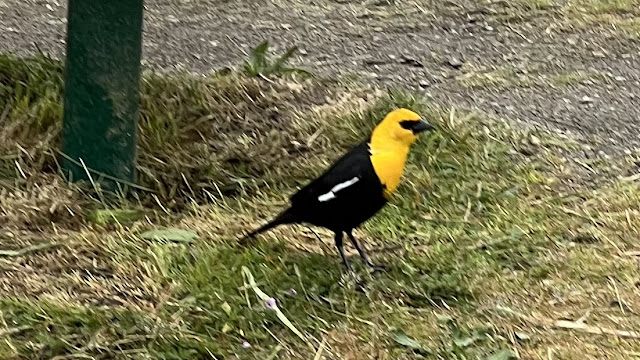 The next day, I was flying to Toronto, happy in the knowledge the Marsh Sandpiper had been seen that morning and as soon as I got my car, drove to Brantford to pick up Sue, and calmly as I could, drove to Lambton, Ontario and the Thedford Sewage Lagoons.  Though it was raining, that didn’t dampen the spirits of the birders who were there and with the help of local ambassador Alvin, we got amazing looks at this Canadian celebrity bird, even if the pictures on a gray and wet day did not come out as well. 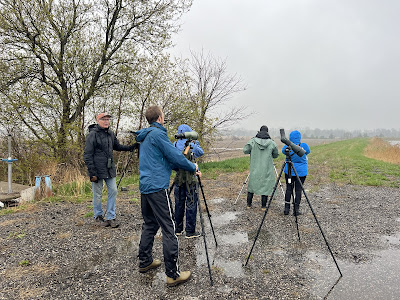 From eBird, until I have a photo of my own: 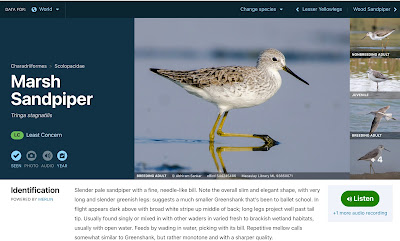 What an exciting week it was, and by the time I was unpacking and doing laundry back home in Brantford, and looking forward to sleeping in my own bed, I had 289 species in the books.  Now, it’s May and time to really begin birding during the migration season, so bring forth the warblers!