After a quicker trip than I had expected to northern Ontario, I was off to British Columbia in search of winter seabirds, including a Yellow-billed Loon, which would be another Lifer.  Of course, just as I got back from Ottawa to get on my flight to Vancouver, a Brambling showed up east of Montreal.  I’m hoping that the Brambling in BC is still there. Of course, with my luck, the bird flew east while I flew west. Perhaps, instead of flying back to Toronto, I’ll have to fly to Montreal if I can’t get a Brambling here.

Yesterday, I did see a huge flock of Bohemian Waxwings.  They are the darker cousin of the Cedar Waxwings; the Darth Vader to the Cedar Waxwing’s Luke Skywalker, of which, I saw just three.  There must have been 60 to 100 individuals in the Bohemian flock.   I feel a kinship to the Bohemian Waxwings this year, since we both lead nomadic lives.  They search for berries, I search for birds.  And on a gray day, these gray birds did not photograph well, so these only qualify as “record” photos. 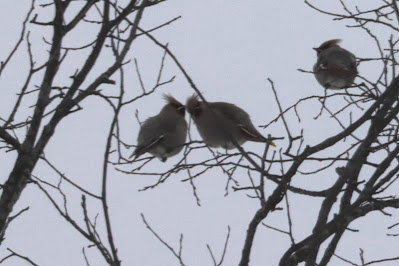 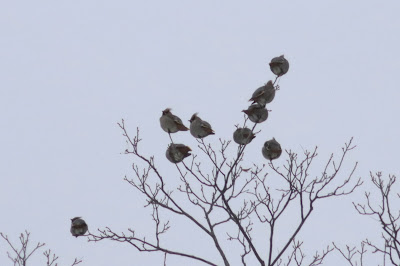 I had to drive directly back to Toronto so I could be rested for my flight to Vancouver this morning.  As flights during the era of Covid, it went quite smoothly even with being on the plane for nearly 5 hours, which included two movies and Episode 3 of the Book of Boba Fett. From the airport to the car rental kiosk and onto the Nanaimo bount ferry, took the better part of three more hours. I did add several birds to the year list on the boat, including Short-billed Gull, the western cousin of the Common Gull I missed on the east coast earlier this month.  Along the way there were many Glaucous-winged Gulls, a Common Murre and even Common Mergansers, which I had yet to see this year. 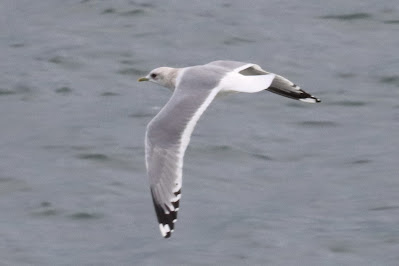 Finally, I was on my way to Surfside Drive with its view of the Salish Sea and, I could only hope, my target of the day.  I arrived at around 4pm local time, meaning it had been more than 12 hours since I had embarked on this cross country chase.  And it was over in less than 10 minutes of scanning the water.  The Yellow-billed Loon was in my scope and I had added a Lifer to my ABA list, number 692, as I edge closer to the 700 Club.  It was distant and diving and I was losing light so all I got was a fuzzy digiscoped photo.

However, there were Black Oystercatcher too and I was able to get a couple of shots of them before it got too dark.  I shall go back in the morning, try to get photos of the loon and then head down to Victoria for the day.  I think I’ll stop for the night, here.  Been a long day, and I need my birdy sleep. 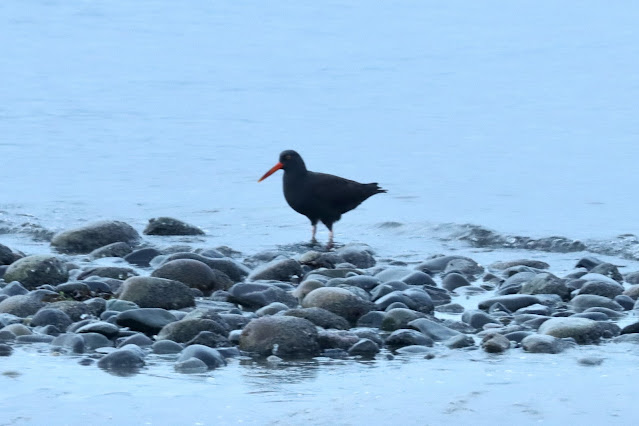 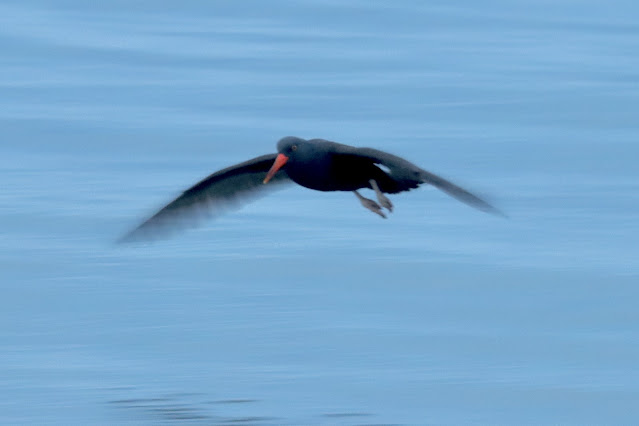