Another Day, Another Lifer!

This morning I headed back to where I had seen the Yellow-billed Loon, hoping for another look and maybe a Digiscoped photo.  I got the look, but not the photo, but did run into a local birder named Cathy, who was also searching for the loon for her 2022 list.  We found it almost the same time, but once it dove we lost it and once again, another photo chance.  However, she did help me spot a flock of at least 50 Ancient Murrelets, flying low against the water at the horizon.  Another Lifer, number 693 for the ABA Area.  This was a bird Sue had seen a few years ago on a trip to California. I had driven to San Francisco to get the Rustic Bunting in Golden Gate Park, and she stayed back for a whale watching trip and got it on the boat,(she was on the boat, not the murrelet).  There were lots of Pacific Loons on the water, along with Common Loons.  I also added Brandt’s Cormorant, Horned Grebe and even my first Trumpeter Swan of the year.  We were unable to locate the continuing Eared Grebe, though.

After sea watching we checked the wetlands across the road, and I scored a bevy of birds for the year list, including Green-winged Teal, Northern Pintail, Eurasian Collared-dove and Brewer’s and Red-winged Blackbird.  When I checked my watch I realized I was way behind schedule to get to Victoria to do some birding in that area, prior to taking the ferry back to Vancouver.  I booked the 3pm ferry, and didn’t get back to the mainland until dark anyway, so should have taken a later sailing.  I really needed to be back to Vancouver to go and chase the Prairie Falcon outside of Surrey, first thing Sunday morning.  Oh well.  I just have to keep those missteps to a minimum, but with my memory issues, it is a struggle.

However, on the way back, I did add an additional two species from the ferry, a Western Grebe and Pelagic Cormorant.  Now, I am in Surrey for the night, having celebrated the two Lifers on Vancouver Island with a streak dinner and Peach Bellini from Milestones.

In the morning I am heading east and will begin the day hoping the Prairie Falcon is still there.  Then on to the BC interior, with a big wish list, including Clark’s Nutcracker, American Dipper and whatever mountain species I can lay my eyes on. 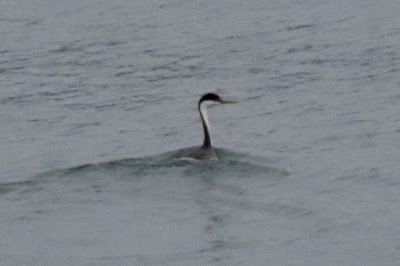