It was a day like any other.  It started with a Brambling in minus 28c sunshine and ended with tromping through deep snow at sunset for a Great Gray Owl.  Okay, it was unlike any day of birding!  In any Big Year there are going to be disappointments and bad luck, where you just miss a rare bird, but they are balanced out, for the most part, with great highlights and days you never imagined.  I woke up knowing I was going for a Brambling this morning, but never imagined the bits of luck that had to happen for a Great Gray Owl to also be on the menu.

First, I had to be at the Brambling stakeout long enough to meet James from Connecticut.  Then, of course, I had to strike up a casual conversation with him, which was easy as he was the only person who spoke fluent English amongst the staked-out birders.  I also had to discover that he didn’t just cross the border today for one bird, but on the off chance that he could get another, just as spectacular, bird as well.

James mentioned that he also wanted to get a Great Gray Owl, while north of the border.  It would be another Lifer.  I mentioned, casually that I could use a Great Gray Owl, as I was doing a Big Year.  So, he shared the address of the park, so we could both search, doubling our chance at finding the big gray bird.  Once we both had good looks at the Brambling, and I got,(bad), photos, which was the only reason I was still there when James arrived, he set out for the 45 minutiae drive to the owl park, and I set out for a full tank of gas and coffee before beginning the trip.

I had started from just outside of Cornwall, Ontario at 7am and was at the Brambling stakeout before 8:30.  It wasn’t there when I arrived, but a handful of local birders, who finally had a weekend to come see it, were there.  It was very cold.  I went back to the car several times to add layers and warmer boots and a scarf and my face mask.  I also kept the heated mittens going on and off so my thumbs didn’t become numb with cold. Eventually the Brambling showed up, but it was for a very brief look and only one person got a photo and he quickly counted his Lifer and lucky stars and got the heck back to the warmth of his car.

The rest of us were not so lucky.  We waited about another half hour before we finally got to see the Brambling clearly and take photos.  It was about then when James arrived and we struck up our fateful conversation.  As I learned later, both these birds today were Lifers for James.  For me, they were important birds to see in the first three weeks of the year, saving chases for them next winter, if at all.

I arrived at the woods where the Great Gray Owl had been reported, though where in the woods it was, was anyones guess.  It had been seen at multiple locations over the few weeks it has been around, and the birders I did run into had not seen it in about six days, themselves.  I eventually ran into James and we continued to look together for a while, spotting a Ruffed Grouse, high in a bare tree along the way.  James decided to head out for lunch, and I stayed to continue the search, uneventfully.  When James returned, I headed out to get warm and consume a hot beverage.

As I was trying to figure out where to spend the night, and if I wanted to stay over and try for the owl in the morning, James messaged that he had found it!  I turned around and raced back, didn’t bother to put my heavy winter boots on, as I figured I wouldn’t be out too long, as it was already getting close to sunset.  I raced as fast as my stiff legs would carry me to the meadow where James had seen the owl. I picked up a pair of birders along the way, as they were photographing the Ruffed Grouse, which hadn’t moved all day.  Unfortunately we took the longest possible way around to the owl, and James, having seen it well, had to head back to his car, with numb fingers but, I am sure, a skip in his step having got two Lifers today.

Sam, Diane and I needn’t have worried, as the owl was sitting high atop a tree scanning for its evening vittles, when we stomped our way through the snow to finally see it.  It was getting dark, and it was far enough away that we didn’t get great photos.  But that wasn’t the point.  We had the Great Gray Owl, and I felt like Jack Black’s character in The Big Year, though it was me who was out of breath by then, so really felt more like the father.

The walk back to the cars was a bit of a slog, though.  No skip in my step.  It was getting dark, we were way off the established trails and I had not put on my snow boots, just my rubber winter hikers which only went up to my ankle while the snow was going up to my knees at times.  I even got in so deep that I was glad Sam was there to pull me out.  I guess I should sing a little ditty of thanks to Sam and Diane,(oh, no, that was Jack and Diane-never mind. Sam and Diane was Cheers).  Luckily not too much snow got into my shoes and it was not anywhere near the minus 28 of this morning. I wouldn't’ have cared anyway, as I was on a Great Gray Owl High.  I blasted the heat on my feet in the car and felt warm all over, as I drove out from Quebec, again.  In just the last ten days, I have driven to Quebec, via Alongquin Park, driven home, flown to British Columbia, had a late night flight back to Toronto and driven back to Quebec.  Yikes!

So, here I am in another hotel room, on just day 22 of 365.  I sit at an unremarkable 130 species so far, but have counted some important ones in addition to today, including the Lesser Goldfinch, Yellow-billed Loon, Ancient Murrelet, Black-headed Gull, Dovekie, Tuffted Duck and Eurasian Wigeon,  So, back to Brantford tomorrow, for a few days of rest and local birding, then I think a trip to Alberta may be in order.

I apologize for the poor photo quality, Great birds, bad photos.  The owl was photographed after sunset and the Brambling was in a tangle of brambles and never seemed to stop moving, plus it was really cold and I was shivering with excitement: 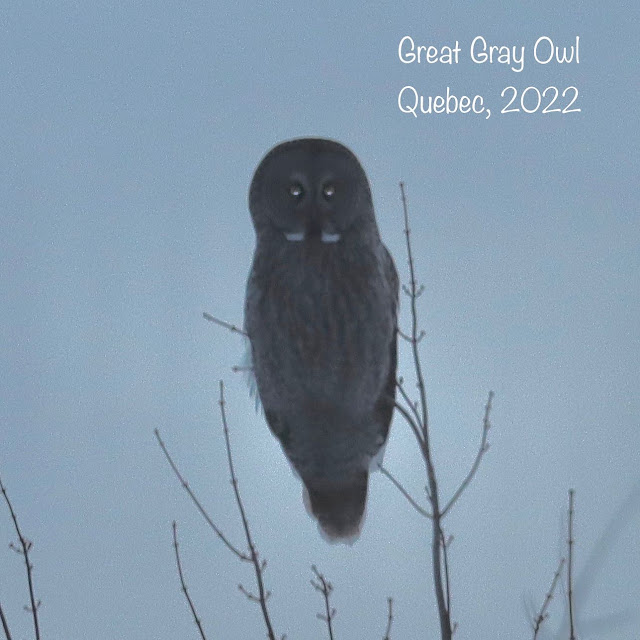 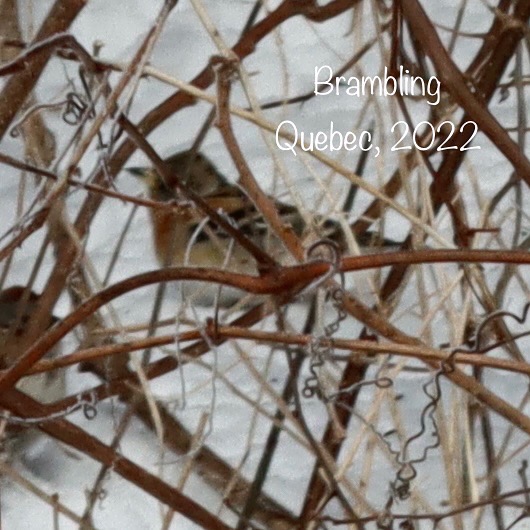 I didn’t have much luck with the photographing my first Purple Finch of the year, either: On the other hand, this Ruffed Grouse sat still all day in the sun, allowing for great photos: 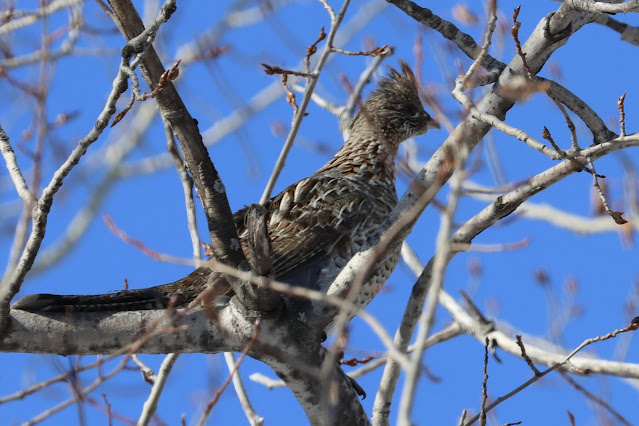