Owl I Need is Good Luck and Helpful Strangers

Those darn owls.  It feels like it should be easy to find them and even easier to hear them in the evenings, after dark.  I’ve been out with many guides over the years in Texas, Arizona, Central and South America and they always seem to have a trick to finding them.  Out on my own, none of those tricks seem to work.  Sometimes it takes a little luck and a bit of help.  Yes, I have found. Long-eared Owl or two on my own, and the Black-capped Chickadees have guided me to a few owls here and there, but it’s usually the keen eye of another birder who finds one first, as with the Boreal or Northern Hawk Owl.
When it came to the Barred Owl, I was searching everywhere and was successful in only finding bare tree limbs.  But I knew others were looking. A few nights ago I was with a two couples here in Brant County listening and looking for a Barred Owl after Dusk, where one was known to have been seen.  It was mostly a social gathering as nothing hooted and no wings flapped in the dark.  On Saturday, while I was out with my buddy, Andy, looking to find him a Greater White-fronted Goose, I got a text telling me that the Barred Owl was being observed in the McKendrick Tract, close to where we had searched on previous days.
Andy and I were 40 minutes away at LaSalle Marina, and he wanted to keep looking for geese, but I was the driver and had the final say, so we drove straight back to Brant.  Another birder was just coming out and guided us to the correct viewing area, where we quickly found it and I was able to get some lovely photos using my iPhone and spotting scope.
It’s easy to identify a Barred Owl by its call, asking “Who Cooks for You?”  Not to be mistaken for a Bard Owl who quotes Shakespeare and questions, “Hoot Be or Not Hoot Be?”   Sorry… 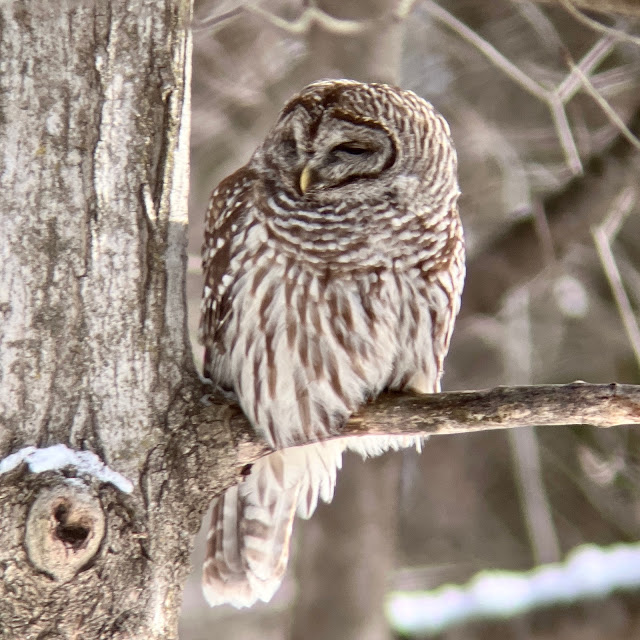 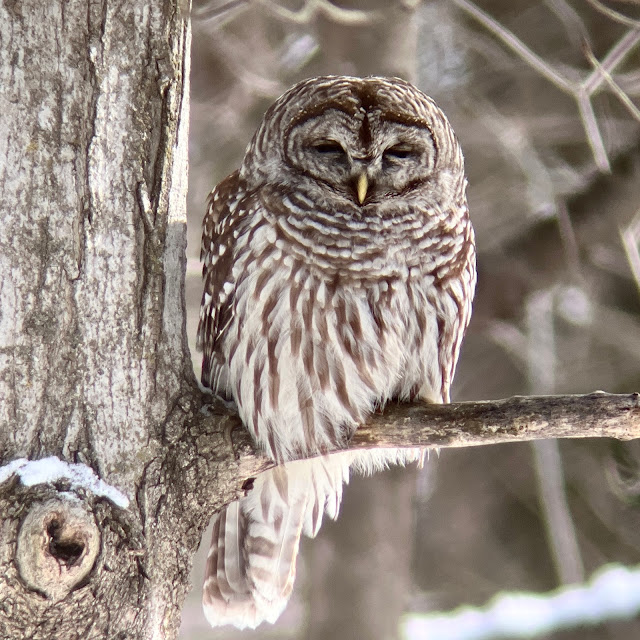 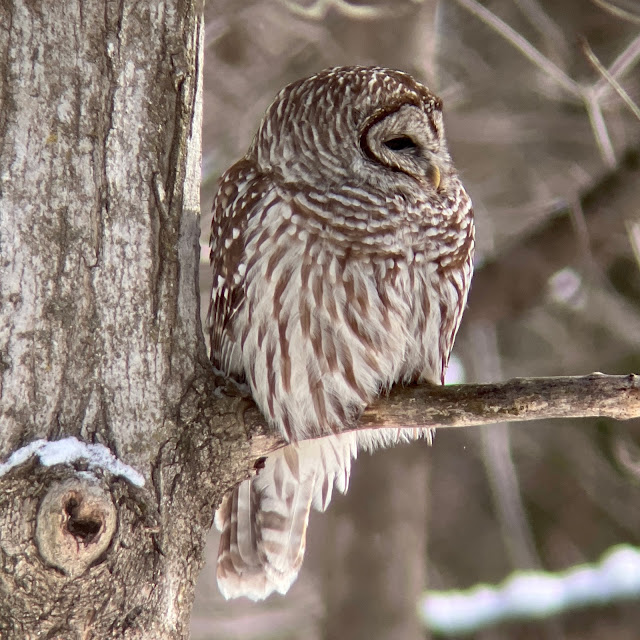 It finally felt like a real spring day today, as I I drove to London, Ontario for a Virginia Rail, but also had some help with another owl.  After easily finding the rail at Glen Cairn Park, with the help of a posting on Birders Nearby, that guided me to the exact viewing spot for the rail, I went to Gibbon’s Park in search of a Great Horned Owl, a bird I have struck out on several times this year.  I walked around for a bit, without much luck and was about to give up when, as I was getting into my car, I saw another birder nearby, and he gave me some advice as to where to find the owl.
I walked back into the park, following as much as his directions as I could remember and found what I thought might be the correct stand of trees.  As I was scanning the area a woman walking her dog asked if I was looking for birds.  I said “yes, in fact I am looking for a Great Horned Owl.”  She responded that she saw a few birders at one specific tree she was pointing to.  I made my way over and started glassing the trees with my binoculars.  I didn’t find the owl, but a local gentleman walked, up camera slung over his arm, and inquired as to my owl spotting success.
I hadn’t seen it, I said, but before I could even ask if he knew where to look, he was pointing midway up a tree, and there, low and behold, was the Great Horned Owl, on an open branch, looking across to another tree, where I assume he was keeping watch on a nest.  I thanked the stranger, as I had with the two other folks who helped me in my quest and began snapping some photos.  Having bagged birds 179 and 180 for Canada this year, I headed back to Brantford for a well earned lunch. 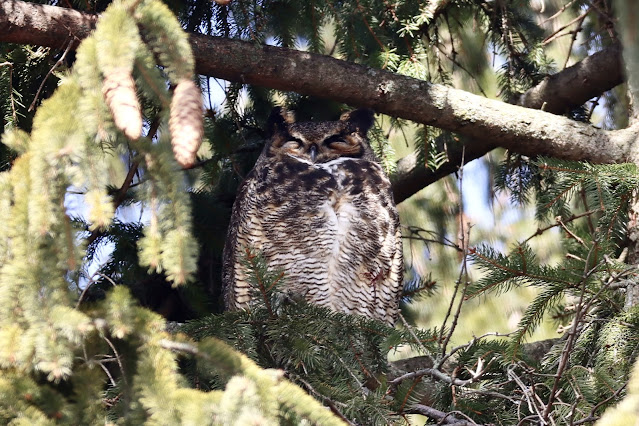 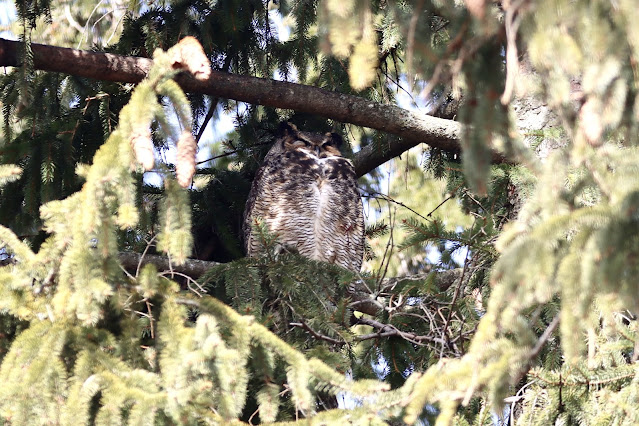 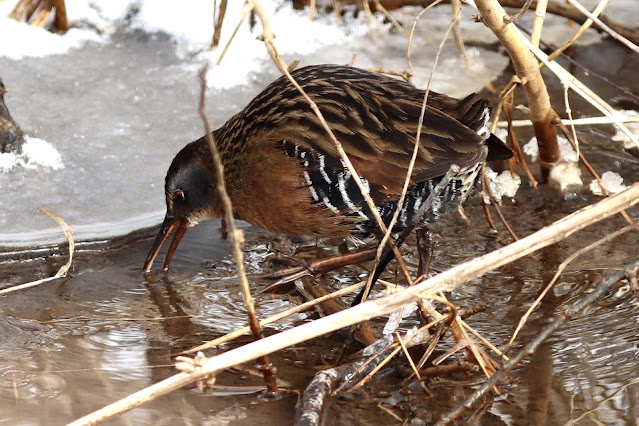 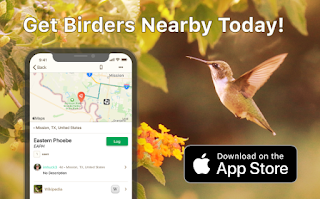 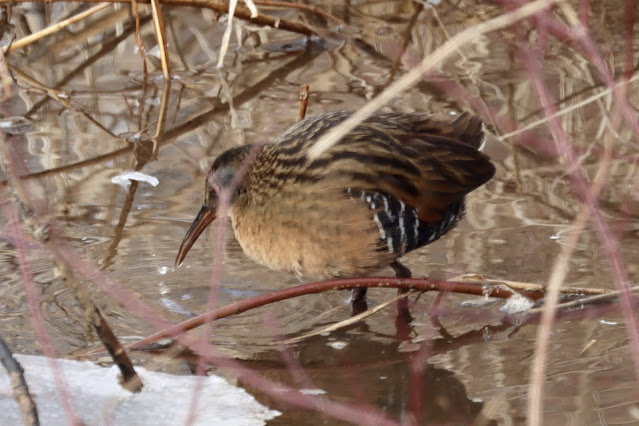 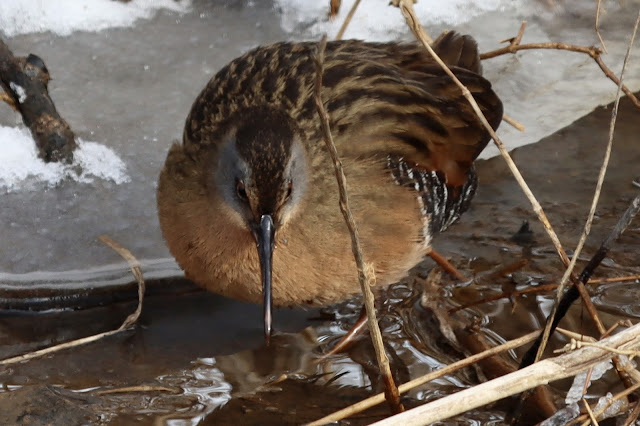