The Man in the Hats is Back!

I’ve worn a variety of hats in my life: magician, escape artist, woodworker, videographer, video coordinator for The Toronto Blue Jays,(for 40 years), product pitchman at fairs, photographer, rock balancer, as well as wearing of multiple styles of fedora.  But now, I bird. I found my way into birding because of the prospect of doing a Big Year and succeeded at that in 2012: My 2012 Big Year  I did another one in 2016, while I traveled with The Toronto Blue Jays: Birds and Blue Jays Big Year. Now, I am back for a third kick at the can, and there’s nothing I’d rather do!

A small selection of the hats I’ve worn as a birder, since 2012: 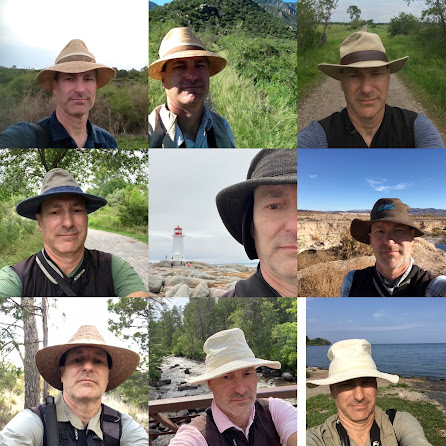 Now, with Covid making travel to the US more difficult, I am missing out on some great ABA rarities and Lifers.  So, I decided to make the best of it and see Canada over the next 12 months.  A Canada Big Year, if you will.  And I will!

I spent the past 2 days scouting Halifax and surrounding area, looking for the best place to begin.  I now know where to find a Tufted Duck, Eurasian Wigeon, Purple Sandpipers, and more. But my real goal for tomorrow is to see a Dovekie.  I missed that bird on the final day of 2012, and missed it on my previous trip to Halifax, in 2018 when I had come east to see the Mistle Thrush in New Brunswick.

This time may be different.  There was a sighting at Peggy’s Cove earlier in the day, as well as at Crystal Crescent Beach the previous day.  So I have my starting point tomorrow.  I did drive over there late this afternoon but the viewing wasn’t great.  I had a distant look through my scope at a very small bird, but no way to know for sure if it was the Dovekie.  Better I see it tomorrow anyway.  Once the Dovekie is in the bag, so to speak, I will revisit the Tufted Duck and Eurasian Wigeon.

There is one other reason I came to Nova Scotia, once I had to punt on my Newfoundland trip.  A large sea bird, the Steller’s Sea Eagle.  I missed it after a 15 hour drive to Quebec in the summer and wasn’t able to come to Nova Scotia when it showed up here.  Now it is in Maine and just has to cross the Gulf of Maine, with the right winds and land somewhere in Nova Scotia, possibly Yarmouth.  I might be heading down that way on Monday, so here’s hoping.